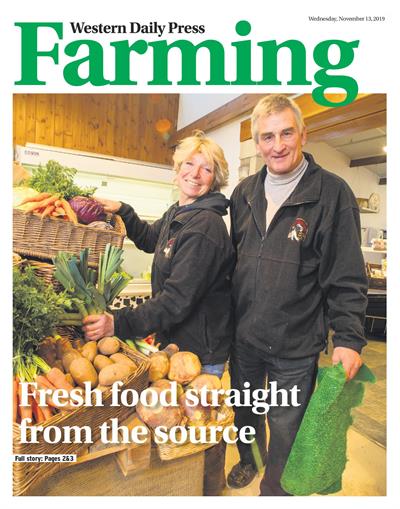 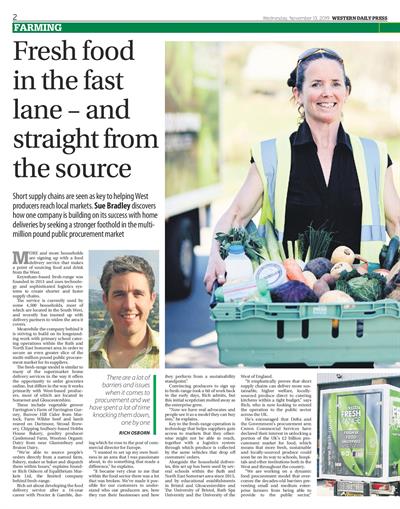 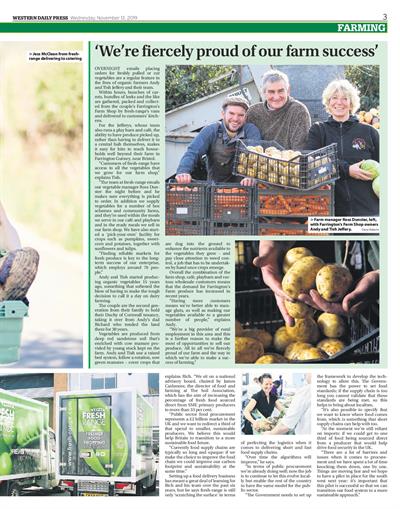 More and more households are signing up with a food delivery service that makes a point of sourcing food and drink from the West. Keynsham-based fresh-range was founded in 2013 and uses technology and sophisticated logistics systems to create shorter and faster supply chains. The service is currently used by some 4,500 households, most of which are located in the South West, and recently has teamed up with delivery partners to widen the area it covers. Meanwhile the company behind it is striving to build on its longstanding work with primary school catering operations within the Bath and North East Somerset area in order to secure an even greater slice of the multi-million pound public procurement market for its suppliers.

The fresh-range model is similar to many of the supermarket home delivery services in the way it offers the opportunity to order groceries online, but differs in the way it works primarily with West-based producers, most of which are located in Somerset and Gloucestershire. These include vegetable grower Farrington’s Farm of Farrington Gurney, Burrow Hill Cider from Martock, Farm Wilder beef and lamb reared on Dartmoor, Stroud Brewery, Chipping Sodbury-based Hobbs House Bakery, poultry producer Castlemead Farm, Wootton Organic Dairy from near Glastonbury and Bruton Dairy.

“We’re able to source people’s orders directly from a named farm, fishery, maker or baker and dispatch them within hours,” explains founder Rich Osborn of Equilibrium Markets Ltd, the limited company behind fresh-range. Rich set about developing the food delivery service after a 16-year career with Procter & Gamble, during which he rose to the post of commercial director for Europe. “I wanted to set up my own business in an area that I was passionate about, to do something that made a difference,” he explains. “It became very clear to me that within the food sector there was a lot that was broken. We’ve made it possible for our customers to understand who our producers are, how they run their businesses and how they perform from a sustainability standpoint.”

Convincing producers to sign up to fresh-range took a bit of work back in the early days, Rich admits, but this initial scepticism melted away as the enterprise grew. “Now we have real advocates and people see it as a model they can buy into,” he explains. Key to the fresh-range operation is technology that helps suppliers gain access to markets that they otherwise might not be able to reach, together with a logistics system through which produce is collected by the same vehicles that drop off customers’ orders.

Alongside the household deliveries, this set up has been used by several schools within the Bath and North East Somerset area since 2015, and by educational establishments in Bristol and Gloucestershire and The University of Bristol, Bath Spa University and the University of the West of England. “It emphatically proves that short supply chains can deliver more sustainable, higher welfare, locally sourced produce direct to catering kitchens within a tight budget,” says Rich, who is now looking to extend the operation to the public sector across the UK.

He’s encouraged that Defra and the Government’s procurement arm Crown Commercial Services have declared their interest in unlocking a portion of the UK’s £2 billion procurement market for food, which means that more fresh, sustainable and locally-sourced produce could soon be on its way to schools, hospitals and other institutions both in the West and throughout the country “We are working on a dynamic food procurement model that overcomes the decades-old barriers preventing small and medium enterprise farmers from being able to provide to the public sector,” explains Rich. “We sit on a national advisory board, chaired by James Cashmore, the director of food and farming at The Soil Association, which has the aim of increasing the percentage of fresh food sourced direct from SME primary producers to more than 33 per cent. “Public sector food procurement represents a £2 billion market in the UK and we want to redirect a third of that spend to smaller, sustainable producers. We believe this would help Britain to transition to a more sustainable food future. “Currently food supply chains are typically so long and opaque: if we make the choice to improve the food chain we could improve our carbon footprint and sustainability at the same time.”

Setting up a food delivery business has meant a great deal of learning for Rich and his team over the past six years, but he says fresh-range is still only ‘scratching the surface’ in terms of perfecting the logistics when it comes to delivering short and fast food supply chains. “Over time the algorithms will improve,” he says. “In terms of public procurement we’re already doing well; now the job is to continue to let this evolve locally but enable the rest of the country to have the same model for the public sector. “The Government needs to set up the framework to develop the technology to allow this. The Government has the power to set food standards; if the supply chain is too long you cannot validate that these standards are being met, so this helps to bring about localism. “. It’s also possible to specify that we want to know where food comes from, which is something that short supply chains can help with too. “At the moment we’re still reliant on imports: if we could get to one third of food being sourced direct from a producer that would help drive food security in the UK. “There are a lot of barriers and issues when it comes to procurement and we have spent a lot of time knocking them down, one by one. Things are moving fast and we hope to have a pilot in place for the south west next year: it’s important that this pilot is successful so that we can transition our food system to a more sustainable approach.”

The above text was taken as an excerpt from the article written by Sue Bradley in the Western Daily Press Farming supplement on 13th November 2019.